The European Securities and Markets Authority (ESMA) is exclusively competent for the direct supervision of credit rating agencies (CRAs) and trade repositories (TRs). ESMA is in fact the only EU agency that can exercise monitoring, investigating and sanctioning powers by itself. However, the question rises whether ESMA also renders accountability for such powers. The delegation of enforcement powers to ESMA appears to have been coupled with the establishment of sufficient political and judicial accountability mechanisms. The accountability framework may thus be assigned ‘AAA’ status. 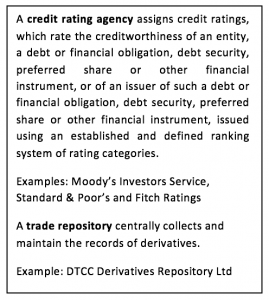 However, if changes were to happen on the basis of the ongoing revision of the operations of the European Supervisory Authorities, e.g. if ESMA’s direct supervisory powers would be extended to other areas of financial services, one important recommendation is to pair such delegation with appropriate changes to the accountability framework so that the ‘AAA’ status can be upheld.

END_OF_DOCUMENT_TOKEN_TO_BE_REPLACED

Editorial support is provided by Emilie Bartels; a Master’s student at Utrecht University and assistant to Mira.