Under the aegis of the SSM, which comprises the ECB and 19 national central banks (NCAs), the ECB carries out banking supervision vis-à-vis euro area banks. To this end, the EU watchdog has been entrusted with various direct law enforcement powers. Yet, for executing its tasks, it still depends to a significant extent on the expertise and powers of the NCAs. For instance, a large part of banks’ (punitive) sanctioning is still being dealt with by the NCAs, upon the ECB’s request. In our recent study ‘EU administrative investigations and the use of their results as evidence in national punitive proceedings’, which was part of the report Admissibility of OLAF Final Reports as Evidence in Criminal Proceedings, we have pointed out the challenges that stem from the fact that certain ECB investigations and their concomitant results can be used as evidence for punitive sanctioning at the national level; in the absence of EU rules providing for clear guidance on the admissibility of EU gathered materials in national proceedings, numerous questions can be raised concerning the protection of defense rights in a composite law enforcement setting. We have identified three types of challenges: how to protect defense rights at the interface of i) different legal orders, ii) non-punitive and punitive law enforcement, iii) administrative and criminal law enforcement. We concluded that the introduction of EU rules facilitating the interoperability of SSM materials as evidence in national proceedings should be put high on the agenda.

In this blogpost, I discuss two of the identified challenges.

The most well- known illustration is the case of legal professional privilege (LPP), which generally prevents compelled testimony of communications between a lawyer and his client. Whereas under EU law in-house lawyers are not protected by LPP, in common law jurisdictions as well as under Dutch law, they are. This misalignment, though not an issue in itself, can create problems where investigations take place at the EU level and end up with a punitive administrative fine by, for instance, the Dutch central bank (DNB). Indeed, where the ECB is not competent to sanction a bank on its own motion, it may request an NCA, such as the DNB, to open sanctioning proceedings. However, the SSM legal framework does not regulate the admissibility of ECB collected information as evidence in the national proceedings. Let us assume then, that during one of its investigations, the ECB has seized copies of internal communication between a Dutch bank and its in-house lawyers. The EU supervisor transmits this evidence to the DNB, requesting it to open sanctioning proceedings. How is the DNB to assess the critical piece of evidence? It was gathered on the basis of EU law powers and subsequently introduced in a legal order that provides for higher protection. Currently, the answer to that question is not entirely clear. This may render the effectuation of LPP at the interface of different legal orders a rather challenging exercise.

The most well-known illustration is the case of the privilege against self- incrimination (PSI). The PSI generally prohibits law enforcement authorities from using improper compulsion against a person to produce information/evidence that would incriminate them. It is only afforded once that person is involved in punitive proceedings. According to well established case law of the ECtHR, where two set of proceedings are closely interlinked, in order to avoid a violation of the PSI, legislators (or courts) have two alternatives: a) either remove the element of significant compulsion in the non-punitive proceedings or, b) restrict the use of information obtained under compulsion for later punitive purposes.

In the SSM setting, the ECB, as an administrative authority supervising banks’ compliance, has a particularly strong information- gathering position. Supervised persons are in fact under an obligation to cooperate with the ECB and provide all requested information, while the privilege is not codified in the SSM Regulation or SSM Framework Regulation. Yet, different procedures, punitive and non- punitive, at different levels, EU and national, are often closely interlinked. ECB gathered evidence may thus be transferred from one set of proceedings to another, often even beyond the closed ‘SSM circle’. In the absence of its explicit regulation at the EU level, how can the PSI be safeguarded? Currently, the answer to this question is not entirely clear.

Towards the creation of EU rules facilitating the interoperability of SSM materials as evidence?

Undoubtedly, effective law enforcement in policy areas characterized by significant cross- border activities requires the existence of information and evidence sharing mechanisms. At the same time, respect for defense rights must be safeguarded.

In the area of EU competition law enforcement, EU law facilitates the interoperability of materials as evidence in numerous ways. For example, Regulation 1/2003 lays down the presumption that defense rights of legal persons in the various Member States are considered as sufficiently equivalent. Furthermore, information exchanged between European Competition Network authorities can be used in evidence only for the application of EU antitrust provisions and only for subject-matter for which it was collected by the transmitting authority. In addition, receiving authorities are precluded from using such information to impose custodial sanctions on individuals. National competition authorities are not precluded from disclosing information to criminal justice authorities, if such an obligation exists under their national law. Nevertheless, the latter must at any rate initiate their own investigation. The way competition law deals with the aforementioned problems is certainly not immune from criticism. For example, as we have noted, Regulation 1/2003 still fails to deal with all three problems. At any rate though, the existence of EU rules bridging all three problems, are essential. Defining admissibility rules for the SSM at the EU level is necessary; it will inter alia ‘break up’ national laws and it will bring national evidentiary laws within the scope of the Charter of Fundamental Rights of the European Union. 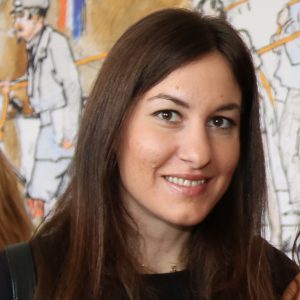 Argyro Karagianni
Argyro works as an assistant professor at Utrecht University.In that capacity, she teaches courses on such topics as the EU Banking Union, the enforcement of anti-money laundering policy and supervision of markets. Prior to starting her PhD research, Argyro worked as a legal trainee at the European Central Bank and as a judicial trainee at the Athens Court of Appeals. She has also worked in private practice and is a qualifiedbarrister in Greece.

Argyro works as an assistant professor at Utrecht University. In that capacity, she teaches courses on such topics as the EU Banking Union, the enforcement of anti-money laundering policy and supervision of markets. Prior to starting her PhD research, Argyro worked as a legal trainee at the European Central Bank and as a judicial trainee at the Athens Court of Appeals. She has also worked in private practice and is a qualified barrister in Greece. View all posts by Argyro Karagianni