By Ana, Natalie and Marceau

Both the Office Européen de Lutte Antifraude (OLAF) and the European Public Prosecutor’s Office (EPPO) share the goal of enforcing the European Union (EU) anti-fraud agenda. Although OLAF is an administrative agency and the EPPO falls more under the field of criminal law, they both act against offences affecting the financial interests of the Union. Hence, the substantive scope covered by the two is in essence the same. However, although the objectives of the two agencies are strikingly close, the approach they use to fight fraud differs. In that sense, one can look at the two as complementing each other at work. While previous research on OLAF and the EPPO focused on the working of the agencies separately (e.g. the issue of the EPPO’s ‘forum shopping’ and OLAF’s accountability), in this blog post we aim to view the two together.

In the following we show both how they may be viewed as complementary to one another as well as what gaps and issues still remain in fighting fraud efficiently with the two enforcement agencies. To fight fraud, two steps have to take place: first, the authorities need to investigate the case, and second, if they find the case fraudulent, the perpetrators need to be prosecuted. Additionally, an effective infrastructure has to be put in place on the EU as well as the Member State’s level to prevent future fraud from occurring in the first place. In the following we discuss those issues in view of the EPPO and OLAF complementarity.

If you are unfamiliar with the roles of OLAF and the EPPO, you can familiarize yourself with their work by watching the above videos.

COMPLEMENTARITY IN INVESTIGATIONS AND GATHERED EVIDENCE

When it comes to investigation, OLAF has strong investigatory powers to gather evidence on cases involving potential fraud. It conducts the so-called ‘internal’ and ‘external’ investigations, overviewing the use (or misuse) of EU funds by the EU as well as its Member States respectively. While in the internal investigations OLAF enjoys a great deal of independence (e.g. it has the right to immediate and unannounced access to information), when investigating potential fraud in the Member State’s context, it is dependent in law and in practice on the Member State concerned. However, Member States are obliged to cooperate with OLAF, ensuring that OLAF has access to relevant information (e.g. databases) under the same conditions as national authorities. In order for OLAF to be effective and efficient in conducting, for example, its ‘on-the-spot’ checks in Member States, such cooperation is essential.

On the other hand, in gathering evidence for prosecution, the EPPO relies on the work of the European Delegated Prosecutors (EDPs) who represent the European Prosecutor of every participating Member State. Upon the instruction by the EPPO’s Permanent Chamber, the relevant EDP may initiate investigations to gather evidence for prosecution. Having the same investigatory powers as their national counterparts, EDPs may, for example, tap phones, search premises and request for information to build up a file. Similarly to OLAF, the EPPO should ALSO be aided by the national authorities when investigating a case

Considering the powers of both agencies, the investigative powers seem to overlap. However, instead of disqualifying one because the other may conduct similar investigations, the two can be viewed as complementing or enhancing the role of one another. With OLAF fighting fraud in the EU for over two decades, the agency has a lot of relevant know-how as well as legitimacy to gather evidence on a case. That evidence may subsequently be used by the EPPO, with OLAF becoming the main investigative body of the EPPO. In fact, such cooperation has recently been put into law, namely by amending the OLAF Regulation. Because of this change, OLAF is obliged to submit its report on any criminal conduct to the EPPO without delay. At the same time, while the EPPO might enhance the role of OLAF by making it its main investigative body, the role of OLAF may be viewed as subdued to that of the EPPO. That is exemplified by the fact that OLAF can no longer continue its investigations once it has handed the file to the EPPO and the EPPO opened its own investigations of the case. On a different note, when the EPPO itself lacks competence to act on a case it considers potentially illegal, it has the duty to report the case to OLAF. In that sense, it is obliged to present OLAF with the information it gathered too, enhancing its role in some cases.

While in the investigation phase more overlaps can be found between OLAF and the EPPO, the possible subsequent steps differ. That is so mostly because OLAF is in essence an administrative agency while the EPPO is primarily a prosecution body.

OLAF’s main outputs following an investigation are drawing up a report presenting evidence and issuing recommendations suggesting further action by other EU or Member States’ authorities. However, as the recommendations are not legally binding, the enforcement powers of OLAF in this regard are quite weak. At the same time, recommendations carry political weight which make the authorities take them into account. The actions recommended may vary from disciplinary and administrative actions to financial and judicial ones, aiming to deter the future misuse of EU funds and remedy the ones that already took place.

Differently from OLAF, the task of the EPPO after the investigation is to prosecute. When the EPPO comes to consider that an allegation of an offence is supported by evidence, and when the case falls under its competence, the EPPO can open a trial before a national court. Because the mandates of the two are so different, it is hard to say that the two complement each other’s work directly. However, in the overall picture of fighting the misuse of EU funds, OLAF’s substantiated recommendations (backed up with evidence from the report) and the EPPO’s prosecution powers jointly contribute to two different fields of law addressing the issue of fraud. With the EPPO’s power to prosecute in front of a judicial body, there is also a possibility that the court will recognize the case as criminal also judicially, issuing a decision that is legally binding.

The fact that both enjoy some powers following-up an investigation phase is important, particularly because the two cover different territories when enforcing their anti-fraud agenda. It is important to note that while the EPPO is established on the basis of enhanced cooperation, meaning that it only applies to the 22 participating Member States, OLAF can act in all 27 Member States of the EU. While the limited scope of the EPPO’s enforcement might be an issue in a territorial sense, the situation can be remedied by the presence of OLAF. Namely, OLAF can step in with its investigations and recommendations where the EPPO has no territorial jurisdiction to do so. In that sense, OLAF and the EPPO may again be viewed as complementary.

At the same time, because the EPPO with more coercive prosecution powers may only operate in certain Member States and not just everywhere, anti-fraud enforcement across the EU may differ in the intensity. This might affect the extent to which fraud is addressed in different Member States, creating differences in policing the use of funds which may lead to abuse (e.g. cross border fraud). While this issue goes beyond the scope of this blog post, it would be a relevant topic for future research.

In conclusion, we summarize the points made above in the table below. By outlining the different powers held by OLAF and the EPPO, we showed how and why they may be viewed as complementary. Overall, the authors believe that with the current system in place, OLAF and the EPPO can fight fraud and abuse of EU funds effectively together. However, some gaps still remain and could be addressed by strengthening the competences and the scope of both OLAF’s and the EPPO. Who would be hurt by stronger common anti-fraud fighting anyways? 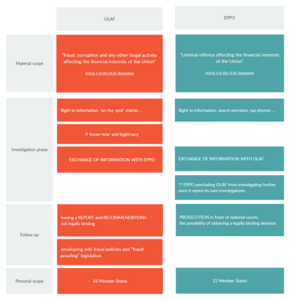 The table shows the complementarity of OLAF and the EPPO in the fight against the misuse of EU funds by the two agencies.