The recent events in Ukraine brought to light once again the difficulties faced by refugees at the beginning and during flight and resettlement. One of the main topics that are creating tension and increased solidarity is the fate and safety of the children separated from their families and parents. In this context, the first-time activation of the (TPD) for Ukrainian refugees sets an unprecedented step forward for the right of unaccompanied minors fleeing war and serious harm to family reunification. This bold political choice also draws attention to the urgent need for revision of the current legislation regulating family reunification for international refugees or beneficiaries of subsidiary protection.

The TPD calls for a more homogeneous and pragmatic implementation of legislation, as well as a more minor-focused direct enforcement at the Member State level. This would imply, among other things, a higher level of coordination among the Member States during the process of family reunification for minors and parents already residing in the Schengen area and less red tape for families divided between the European Union and a third country.

The State’s obligation regarding the best interest of the child

EU legislation, in line with the best interest of the child principle, the TPD Directive and the Reception Condition Directive, addresses the treatment of unaccompanied minors, the appointment of representation, suitable accommodation, access to education and vocational training, healthcare and psychosocial assistance. However, the situation becomes more fragmented in relation to the right to family reunification and its enforcement, a crucial instrument of protection of these minors.

In the case of Ukrainian refugees subject to the TPD, legislation grants the freedom of movement in the Schengen space, so that minors can pass through and reunify with their family members. When registering the minor’s presence, the host country has furthermore the obligation to initiate measures to identify relatives already residing in the EU, according to Article 15 of Directive 2001/55/EC and relevant national laws transposing this directive right.

Lastly, according to the operational guidelines of TPD, the definition of relatives entitled to family reunification in the TPD is very inclusive; hence it comprises not only parents/spouses and unmarried minor children/siblings, but also other family members living together with them, encouraging member states to use their margin of appreciation in the “most humanitarian way”.

Unaccompanied asylum-seeking children are instead subject to the Dublin III regulation and to the Family Reunification Directive (Directive 2003/86). This implies that the country in charge of processing their application is the first one where their presence has been registered in the EURODAC system. If a parent or relatives are already in Europe, the Dublin Regulation allows for unification during the asylum claim, but this often requires excessive time frames, meaning that there is a need for swifter resolutions at the implementation level.

When parents and relatives are in a third-country, the right to family reunification usually implies a residence permit. The permit cannot, however, be granted until the asylum procedure has been completed. From that point on, a further distinction needs to be made under Directive 2003/86, namely between minors granted refugee protection and the ones granted subsidiary protection.

The former has the right, between three months after the recognition of their refugee status, to apply for privileged family reunification, meaning that the eligibility criteria laid down in Art. 7 of the Family Reunification Directive (minimum income, enough living space and so on) do not apply.

Nevertheless, the eligible family members include only their parents and not minor siblings.

On a practical level, this means that most minors reunite first with one parent.

No family reunification rights for beneficiaries of subsidiary protection

Minors with a subsidiary protection status are not entitled to family reunification. In a called for a revision of the legislation, stressing that whereas these minors also suffered from forced displacement as the ones entitled to refugee protection, EU member States shifted away from awarding this more comprehensive protection status (based on the Geneva convention) in an attempt to control the increasing of numbers of asylum seekers arriving to Europe after 2015.

Among many different arguments against the current legislation, the EP mentions the States’ obligations not to discriminate against similarly situated persons, which is indeed the case between minors under refugee or subsidiary protection.

As an example, in many Syrian families, one member may have been granted refugee status according to the Geneva convention, whereas others may have been given subsidiary protection. Rather than having to do with their own situation and exposure to dangers in the home country, this shift was influenced by the political will to restrict family reunification after the 2015 increased inflows from asylum seekers. However, whenever they would appeal against the decision of subsidiary protection, their chances of upgrading to the Geneva Convention were high also between 2015 and 2018. As my personal experience in the field showed, unfortunately, a lack of information about the two-week time period for filing an appeal led to several applicants losing the opportunity to change their status. 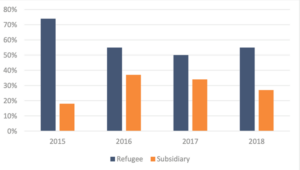 The psychological and emotional well-being of children is directly connected to the possibility to rely on their closer family bonds. This is especially the case when they are facing new challenges after fleeing war, such as learning a new language and adapting to the host country’s social and educational system. Having their parents and sibling with them plays a crucial role in successful integration and in their personal development.

The provisions on family reunification entailed in the Temporary Protection Directive clearly show the path for possible improvements that could be extended to other legal categories of minors by modifying the enforcement of the Dublin III Regulation and of the relative provisions of Directive 2003/86. Ideally, minors should be able to expect the highest degree of harmonization and protection of their rights when it comes to family reunification. The changes in the legislation should strive to create provisions and procedures that cut the red tape on family reunification, introducing for example a more inclusive definition of relatives entitled to family reunification. Consequently, this should lead to the extension of the right to family reunification for subsidiary protection and minor sibling’s reunification opportunity for refugees. So far, the political will to resolve the issue was not present and despite the Briefing of the EP the current situation is likely to remain unchanged in the next few years. It seems as if unaccompanied minors from third countries are more seen and treated solely as asylum seekers from the current legislation rather than also considering their status as minors needing help and protection. 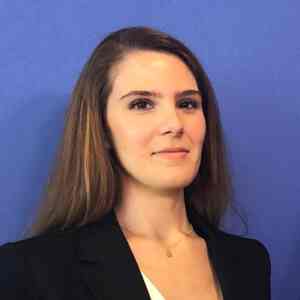 Sabrina Ferraz Guarino
Sabrina Ferraz Guarino studied linguistics and European studies with a focus on social affairs, migration and employment. As a specialist, she worked many years on the field supporting the school to work transition of vulnerable youth and counseling out of court on Migration and Asylum Law for the German Federal Ministry of Family, Senior Citizens, Women and Youth in the Youth migration service.

Sabrina Ferraz Guarino studied linguistics and European studies with a focus on social affairs, migration and employment. As a specialist, she worked many years on the field supporting the school to work transition of vulnerable youth and counseling out of court on Migration and Asylum Law for the German Federal Ministry of Family, Senior Citizens, Women and Youth in the Youth migration service. View all posts by Sabrina Ferraz Guarino