On October 17, 2013 a chartered flight from Rotterdam, the Netherlands to Lagos, Nigeria returned eighteen Nigerian citizens to their home State. These so-called returnees were all subject of individual removal orders from different EU Member States. Usually Member States organise such a return operation individually, it can however also decide to organise a return operation which is open to the participation of other Member States. The Member State can then inform the national authorities of other Member States, which in turn can decide to participate in the joint flight. The return operation then becomes a Joint Return Operation (JRO). These JRO’s are coordinated by Frontex , a decentralised agency of the EU which was originally established by Council Regulation (EC) 2007/2004. Regulation (EU) 2016/1624 revamped Frontex, dubbing it the European Border and Coast Guard Agency.

During this specific JRO, the European Committee for the Prevention of Torture and Inhuman or Degrading Treatment or Punishment (CPT) carried out a surprise visit to observe the treatment of returnees. In their report, the CPT found several areas of concern during the operation: indiscriminate use of physical control, the extended period of time during which a detainee remained body-cuffed and the fact that medical staff was not present throughout the whole journey, even though Article 11 of the Code of Conduct for Joint Return Operations coordinated by Frontex prescribes that they should. Because of their nature, operations such as JRO’s may result in fundamental rights violations or misconduct as described above. Although such operations are carried out by Member States and Frontex together, only Member States themselves are accountable for any misconduct occurring during the operations according to Article 42 of Regulation (EU) 2016/1624. This includes, but is not limited to, JRO’s. We argue that Frontex must recognise its responsibility as owner or co-owner of the operations it co-ordinates and implements and should thus also be held accountable to a certain extent.

One way to enhance the accountability of Frontex is to strengthen the transparency with regards to its operations. Frontex has to comply with the basic Treaty framework which includes the primary law obligation to conduct their work as openly as possible (Article 15 (1) TFEU) as well as to maintain an open, transparent and regular dialogue with representative associations and civil society (Article 11(2) TEU). The Agency is also bound by the requirements of an open access to documents to all EU nationals and residents as guaranteed in Article 42 of the Charter of Fundamental Rights in accordance with the provisions of Regulation (EC) 1049/2001.

The current handling of transparency is dealt with in Article 74 of Regulation (EU) 2016/1624, which further obliges the Agency to make public any “relevant information” and to ensure that both the public and interested party are given comprehensive and reliable information on its work, however this excludes any operational information which may jeopardise the attainment of the operation’s objectives. It is laudable that the agency publishes certain important documents online, including its annual reports, the external evaluation, progress reports on the Fundamental Rights Strategy, its work programme and general risk analyses. The European Ombudsman noted that there is limited public information available with regards to JRO’s. As of March 2018 the only available document with regards to JRO’s on the Frontex website is the Guide for Joint Return Operations by Air coordinated by Frontex. In the review of the first 12 months of the European Border and Coast Guard Agency, its operations are mentioned but it only provides basic information and no thorough evaluation. On the website the Code of Conduct for all persons participating in Frontex activities cannot be found, nor any of the Evaluation Reports of the operations. No mention is made anywhere on filed Serious Incident Reports or on filed Individual Complaints.

Specific information regarding the conduct of operations such as Serious Incident Reports and Operational Plans can be individually requested with the Transparency Office of Frontex. If proof of identity is attached, Frontex assures an answer to the request will be received within 15 to 30 working days. The reasons for any (partial) refusal have to be stated and a sort of appeal procedure is guaranteed. A short Annual report on public access to documents is made by Frontex each year and annexed to the general Annual Report. The latest report available is for 2016, in which year Frontex received 75 requests for access to 725 different documents. Only around 20% of all applications were granted full access. The vast majority of (partial) refusals were either because of public security concerns or individual privacy concerns. Unsurprisingly, the Report states that the most common requests were for Serious Incident Reports from Frontex operations. The most requests for documents were made by academics and journalists.

This seems to confirm that factual reports on the various operations are Frontex’s most sought-after documents. The data also coincides with our statement that these documents could be used as a source of civil society accountability, as a very large part of the applicants were journalists.  However, the mere 23% success rate of the requests for documents is certainly regrettable. This means that information on incidents in external border control becomes difficult to obtain, as Frontex either refuses access to these documents or releases them in highly redacted form. This was in fact made apparent in 2016 when Frontex inadvertently released unredacted versions of its Serious Incident Reports of joint operations. Although they were quickly replaced by the edited versions, the full versions of the documents are still being made available by a group of investigative journalists. Even a cursory comparison between the two versions of the same documents is telling. For example, Frontex censored any mention of the use of firearms during operations and justified this by invoking the public interest exception, declaring that this would “harm future operations”. This would seem to suggest that Frontex did not want to reveal any sensitive information that could potentially harm its reputation, by relying on a wide interpretation of “public interest”. 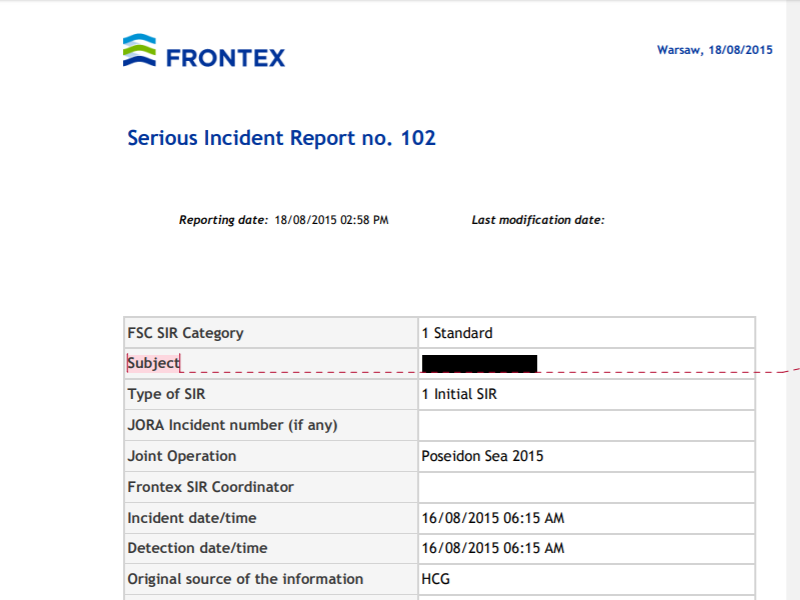 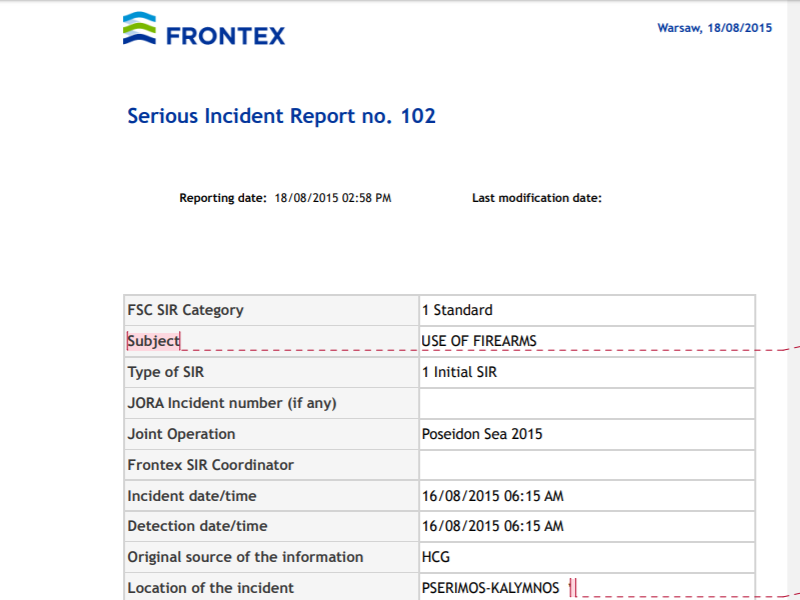 If we consider transparency as a precondition of being able to hold Frontex accountable, the free access to reports on specific missions would seem to be crucial. Access to thorough accounts of how an operation was conducted is of such vital importance, firstly because this allows both civil society and EU institutions to monitor Frontex more effectively, as they can call out any “informal practices” and irregularities that would emerge. This would thus contribute to stronger accountability of the agency in the conduct of its operations. Secondly, the access to documents is also essential for people whose rights have reportedly been infringed during the conduct of such operations.

Taking a look at the JRO of October 2013 it is clear that not every operation coordinated by Frontex is without its flaws. To address such flaws it is necessary that both civil society and EU institutions are able to monitor Frontex more effectively. This can be done by strengthening the transparency of operations carried out by Frontex. The steps that have been taken in recent years are commendable: creating a Transparency Office, simplifying procedures and increasing both transparency and speed of access to documents. However, it is a concern that Frontex only publishes the bare minimum of documents on its website. To strengthen the transparency and accountability of Frontex it is thus recommended that the Code of Conduct for its operations, monitors’ observations and Frontex recommendations, Evaluation Reports of operations, Serious Incident Reports and the results of Individual Complaints procedures should be published on its website. However, there should be limits to the access of documents on the basis of individual privacy concerns or, in case of a still on-going operation, public security concerns.