In recent months, the European Union (EU) has witnessed the rise of an invisible enemy, the COVID-19 virus. Whilst the virus knows no race or colour, it does affect certain communities more than others. As the Commissioner for Crisis Management, Janez Lenarčič mentioned, ‘the impact of the coronavirus outbreak on the most fragile countries, migrants and the most vulnerable people is likely to be dramatic’. Specifically, the spread of the virus in the five refugee camps in Greece developed under the hotspot approach (Lesvos, Chios, Samos, Leros and Kos), would be a nightmare for an already terrible existing situation. As Amnesty International rightly pointed out, in this situation, ‘the risk for refugees on Greek islands are multiplying by the hour’. The intention of this blogpost is twofold. It is first meant to shed light on the situation in these hotspots facilities before and during the COVID-19 pandemic, and second to analyse the reactions of the Commission and the European Parliament to this extraordinary scenario.

Towards even more violation of fundamental rights in the refugee centres

The situation before the COVID-19

Violations of fundamental rights within the hotspot facilities have been documented since its first implementation. Within this category, we can list violations of the right to human dignity linked to the inadequate and low reception and living conditions, and incidents of torture and ill-treatment (sexual humiliation, slapping and punching). The situation deteriorated with the EU-Turkey statement, adopted in March 2016, which further eroded the protection of fundamental rights. Pursuant to the statement, asylum seekers in Greece were facing detention followed by geographical restriction lasting approximatively two years (the time for the asylum application to be completed). A few weeks before the COVID-19 erupted, Turkey violated the statement by opening its borders and the situation became uncontrollable. The Greek government decided at the time to adopt an Emergency Act which suspended the fundamental right to claim asylum for asylum seekers arriving in March.

The situation during the Coronavirus crisis

Before the crisis, the Greek hotspots witnessed the systematic denial of fundamental rights. This already precarious situation, when confronted with a pandemic, became even more dangerous. In fact, in refugee camps, social distancing and health measures cannot possibly be realised. The refugee camps are overcrowded, ill-equipped and the hygiene conditions are disastrous. To take a concrete example: the Moria camp on the islands of Lesbos has been built for 6,000 people but hosts today more than 18,000 individuals. It contains one water tap for every 1,300 people and there is limited access to showers and soaps. The health measures mandated by each national government become impossible to respect in these camps.

In response to the crisis, Greece took drastic measures to prevent the virus from spreading. Greece notably restricted the movement of refugees and migrants outside of the refugee camps and limited the number of personnel deployed on the camps. A number of NGO’s had to suspend their operations in these centres and could not provide services to refugees anymore, such as education. This affects migrants even more since the majority of the individuals in the camps rely on works of charities and NGOs to survive and stay safe.

In response to the dramatic and inhumane situation in the Greek refugee camps, a number of civil societies have sent a letter to the EU institutions (the President of the European Commission, of the European Parliament and of the Council) as well as to the Prime Minister of the Hellenic Republic. The 96 civil societies have requested a European response to this crisis, and particularly a decongestion of the Greek islands so as to avoid a massive European humanitarian crisis.

Stronger activism from EU institutions to the crisis in Greece

The situation during the Coronavirus crisis

The different EU institutions, as well as some EU agencies, took measures and reacted swiftly to the situation at stake. For the purpose of the blogpost, I will focus on the reactions of the Parliament, as well as the Commission.

The European Parliament took interesting measures that allowed to advance towards a solution to the crisis. It notably sent a letter to the Commissioner for Crisis Management, and held a LIBE Committee Meeting (the Committee on Civil Liberties, Justice and Home Affairs) that allowed for discussion on the situation in Greece and the external borders. However, the main measure it took was the Resolution it adopted on the 17th April 2020 on EU coordinated action to combat COVID-19 pandemic and its consequences (2020/2616(RSP)). Paragraph 50 of the Resolution specifically mentioned the hotspots on the Greek islands. The Parliament pointed out the situation in the hotspots (lack of adequate health care) and urged for solutions such as ‘the preventive evacuation and relocation of the population at high risk’. Additionally, it emphasized the duty of Member States to protect fundamental rights, and in particular European asylum law. Through the Resolution, the Parliament emphasizes the need to ensure the right to asylum during the pandemic, and to swiftly decongest the hotspots on the Greek islands so as to prevent any humanitarian disaster.

The European Commission, as guardian of the Treaties, took a more practical and active stance on two aspects. These aspects were the right to asylum and the enforcement of the principle of solidarity. Regarding the right to asylum, the decision that had been taken by the Greek authorities to suspend such a right were in violation of EU and international law. Ylva Johansson, the EU Commissioner for Home Affairs, took a strong stand against it and emphasized that individuals in the EU have the right to apply for asylum, and that this right can in no case be suspended. Greece, however, continued the suspension of the asylum applications until April 10th, due to the pandemic and the suspension of the Greek Asylum Service. However, once again, the Commission recalled that every incoming migrant should have the right to apply for asylum, even in this extraordinary circumstance. The Commission even published a ‘COVID-19: Guidance on the implementation of relevant EU provision in the area of asylum and return procedures and on resettlement’ and requested every Member State to pursue the asylum procedures to the greatest extent possible. By doing so, the Commission recalled Greece’s obligation to protect this fundamental right and it remains in constant discussion with the national authorities in that regard. In fact, the virus should not render an illegal situation, such as the one that occurred before the COVID-19 in March to refuse the registration of applications, legal on the grounds of extraordinary circumstances. However, Greece did not fulfil its obligations and suspended the Greek Asylum services (registration, interviews, appeals…) until the 15th May on grounds of public health, thereby ignoring the fundamental right to asylum and the Commission’s recommendations.

An enhancement of the principle of solidarity

The principle of solidarity among Member States, enshrined in Articles 2 and 21 of the Treaty on the EU as well as Article 80 of the Treaty on the functioning of the EU, covers notably asylum policies, immigration and border control policies. The European Parliament and the Commission stressed the need for enhanced solidarity. This is because the COVID-19 crisis cannot be tamed alone but calls for a coordinated European response. Solidarity here includes financial solidarity, technical solidarity as well as administrative solidarity. Financial assistance has been made possible by the Commission, with 350 million euros being deployed to offer support to the reception centres, as well as with the provision of some health materials.

Solidarity was also reflected in the relocation of unaccompanied minors from Greece to other Member States of the EU. The will to relocate vulnerable individuals was not introduced as a result of the COVID-19 pandemic. In fact, pursuant to the opening of Turkey’s borders, Member States discussed the possibilities to relocate notably the unaccompanied children that crossed the border. However, the effect of the Corona pandemic was to inject fresh urgency into the situation, making it increasingly important to decongest the reception centres on the Greek island, and thus to relocate as many individuals as possible. The European Parliament and the Commission repeatedly stated that the ‘relocation of the population at high risk’ would prevent the spread of the virus in the hotspot facilities, and consequently a humanitarian disaster. Thus, whilst the urge to relocate already existed before the pandemic, COVID-19 triggered its acceleration and brought the urgency to the forefront, pointing out thereby the need for more Member States to take action. As of today, eight countries promised to welcome unaccompanied children from the Greek islands: Luxembourg, Germany, France, Portugal, Finland, Lithuania, Croatia and Ireland. As of today, Germany and Luxembourg have delivered on their commitment and welcomed unaccompanied children (the final aim being to transfer 1600 unaccompanied children). In the European Parliament LIBE meeting, Commissioner Ylva Johansson stated she was continuing to work closely with Member States in order to offer even more solidarity and to relocate even more migrants.

However, when one looks at the number of people on the camps, this positive and strong involvement of the Commission and the Parliament remains insufficient. In fact, even though the number of migrants in the centres decreased of 1482 in the month of April, the Greek islands hotspots still host 33,357 individuals for a capacity of only 6,095 in Mid-May. Thus, whilst so far, the nightmare has been narrowly avoided, it still looms as a constant and very real threat. The camps are still overcrowded and still lack adequate health facilities and are consequently still excessively vulnerable to the threat of COVID-19. In light of this, a swifter and stronger response from the EU institutions and Member States needs to be taken. For example, the relocation of migrants should be offered by more Member State and should include vulnerable people and not only include unaccompanied migrants. Moreover, Greece should welcome some of the migrants to the mainland, or house them in the unoccupied hotels on the island. Lastly, the EU should ensure better healthcare and more financial support are provided for Greece and the migrants, in addition to guaranteeing that all of these measures are adequately implemented. 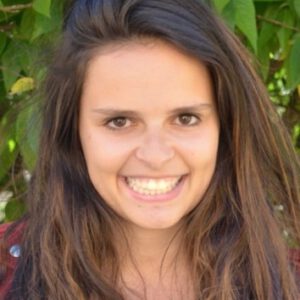 Sarah Tas
Sarah Tas is a PhD Researcher at the European University Institute. Her work focuses on EU administrative law, EU criminal law and EU immigration law. In this regard, she is particularly interested in the role of EU agencies such as Europol and Frontex.

Sarah Tas is a PhD Researcher at the European University Institute. Her work focuses on EU administrative law, EU criminal law and EU immigration law. In this regard, she is particularly interested in the role of EU agencies such as Europol and Frontex. View all posts by Sarah Tas